Jasper Stadhouders plays a set at the Downtown Music Gallery on October 11, 2022. All videos: Hari Adivarekar

Jasper Stadhouders was in a musical trance, immersed in his guitar at the Downtown Music Gallery, a tiny record store in New York City. Beads of sweat appeared on his furrowed brow, his eyes scrunched shut. His hands channeled his whole body, as they traversed the neck of his grungy electric guitar, festooned with worn stickers.  He used a spoon, both as a string tapping implement and a percussive tool, on the body of his guitar. The spoon was soon replaced by a sharp, dagger shaped rock, stroked like a bow across the six strings. At one point, he paused, to detune his guitar.
Stadhouders, 35, is that rare guitar player that can play anything on his instrument. He does that to dizzying complexity with a variety of ensembles and bands across Europe, where he is based. This was him cutting loose, stepping beyond the structures that define what is musical, surrounded by towering racks of CDs and records. He said, “a trip to America isn’t complete without a pilgrimage to the Downtown Music Gallery (DMG)", a rare and unique space in the pantheon of free, improvisational music.
Every week, the DMG in Manhattan’s Chinatown transforms from a store to an underground music venue. Down a decrepit set of stairs on the nondescript Monroe Street, between the Williamsburg and Brooklyn Bridges, a coven of mad musical scientists pushed the very boundaries of sound creation. Some bands veered towards brief melodic interludes of haunting beauty, others eschewed the hubris of pitch, scale and rhythm. Instruments were turned into adventures, with fresh discoveries around every guitar neck or snare drum.

Don't feel like reading? Listen to an audio feature on the Downtown Music Gallery

Bruce Lee Gallanter outside and inside the DMG. All photos: Hari Adivarekar

Owner and co-founder Bruce Lee Gallanter, 68, has been a one man institution for this underground scene. He started hosting gigs at his store over 30 years earlier and curated a style of music called Downtown Music, a loose term coined for jazz musicians from the Lower East Side of Manhattan.

“It's an open-ended thing. Downtown music is people not worrying about a genre,” explained Gallanter. ”They're gonna try to do whatever they want to do.They're gonna borrow from different genres.This way people don't put expectations too much. When you play jazz, people expect you to play in a certain way.”  The DMG provided a platform for artists playing genre bending free music that encompassed avant-garde jazz and contemporary composition, experimental, and improvisational music from around the world.
Every Tuesday at 6pm, racks of records were moved to create a little room for a stage. The drum kit and amps, usually tucked away behind shelves, were brought out. A slew of fold out chairs were set up in the narrow aisles. Musicians stumbled down the stairs carrying their instruments and set up quickly. All of a sudden, the record store was a music venue. A place where musicians felt free to express themselves through open improvisation.
“So you're in this place, it's like a crossroads of the world, and yet you're entirely local,” said Mark Daterman, 56, who is a retired school teacher and lifelong musician who has known Gallanter for over forty years. “There's an international thing going on that’s connected to Europe and all the different scenes all over the place. And Bruce is connected to all that,” he said.

This kernel of a community blossomed into a full tree over the last three decades to pull in musicians, record labels, collectors, customers, listeners and friends into the orbit of the gentle but astute Gallanter. He has a quick, open smile, expressive eyes behind his rimmed spectacles, a shock of white hair and humor tinged interactions with his customers. His easy manner is belied by a formidable musical intellect that combines a finely honed instinct for sonic greatness with an encyclopaedic, granular memory for names, dates, performances and stories.
“I have a sense of humor so I joke with people as well. I think it’s all those things,” said Gallanter, explaining his approach to the store, “it's like we're a family in this place. People feel that vibe and feel at home. They don't, they don't get this snooty record, record guy that's gonna make fun of their music taste.” For Gallanter, buying Frank Zappa and the Mothers’ pathbreaking debut album, Freak Out, as a 13 year old, sparked off a lifelong obsession with music.

Gallanter always has a lot of time for his customers, often breaking into detailed musical conversations

“I've worked at Tower Records and we executives would talk but nobody listens to as much music as Bruce. I mean, he's in a league of his own,” shared Rob Tefft, 60, a regular in the audience at the DMG. Tefft was once in management at the legendary record store before it shut down in 2006.
From 2003 to 2009, the DMG was in the Bowery,  just around the corner from a branch of Tower Records. according to Gallanter, a cluster of around 15 record stores once occupied a few city blocks in the area. ”We were part of a community of record stores. Most of those have closed because they couldn't afford the rent.” Gallanter was forced to move DMG to its current Chinatown location after the rent for the Bowery store increased from $4,000 a month to $10,000. He had already struggled to make the $4,000, due to a downturn in the sales of CDs and records after the advent of easily accessible digital music, first on listening devices and then on phones.
The DMG has stayed afloat through three decades and the covid pandemic thanks to its global mail order business. Every week, Gallanter sends out an email newsletter to over 7,000 subscribers. He writes reviews, features and has a catalog of available music, both new and old. During the pandemic, the newsletter became a space for him to express more personal feelings and memories, a lifeline for Gallanter. It was hard for him to stay home when the store occupied such a vital part of his life and routine. 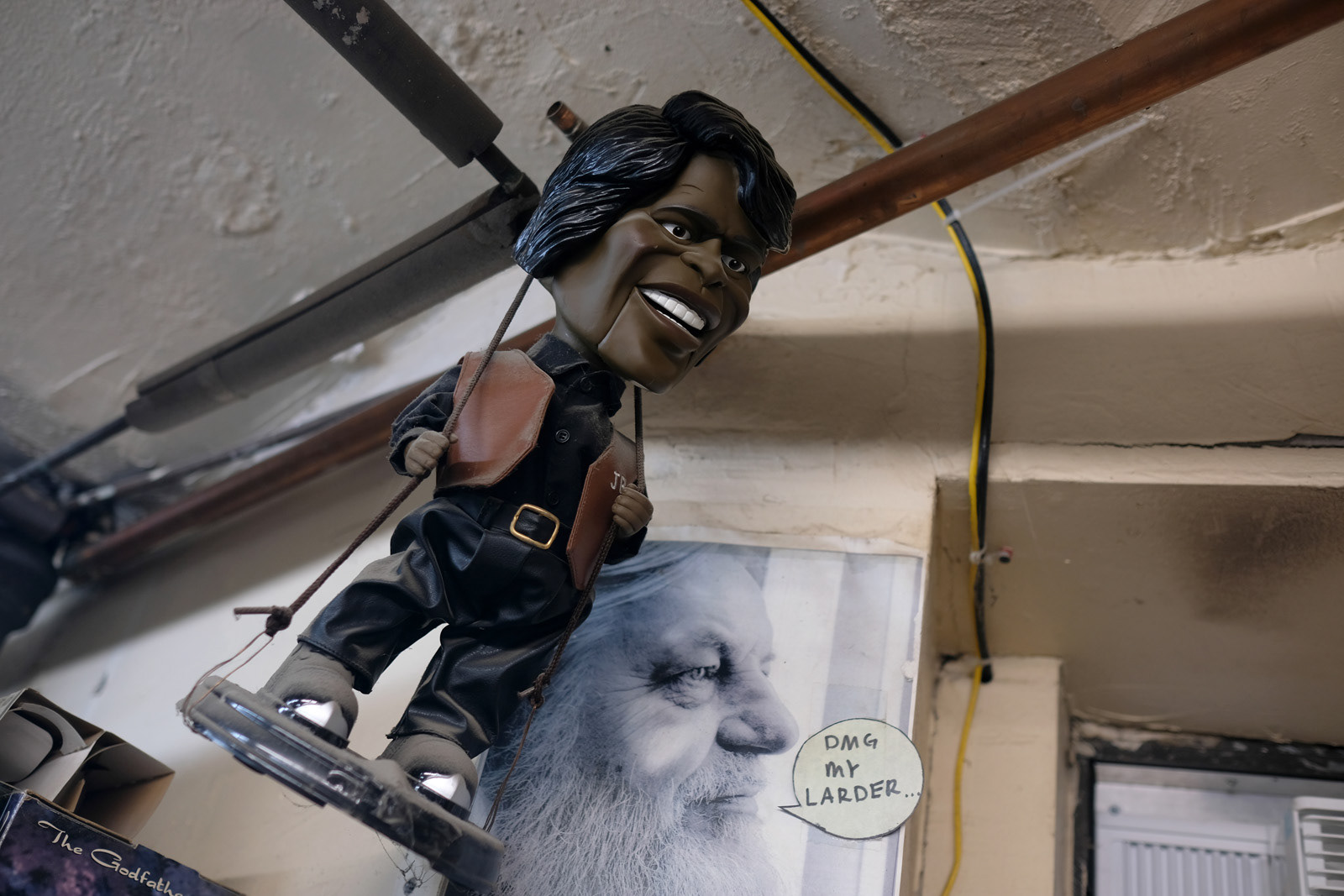 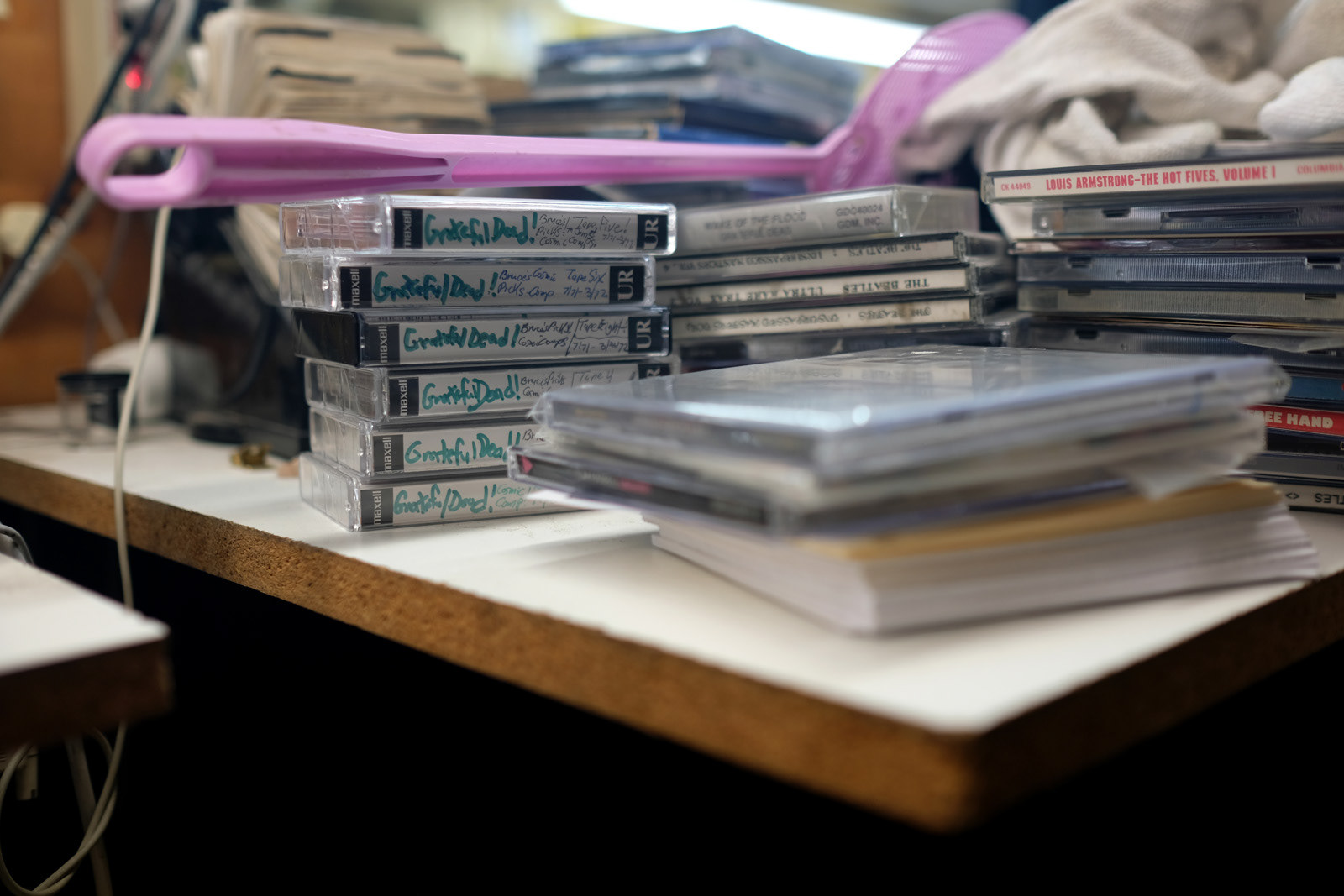 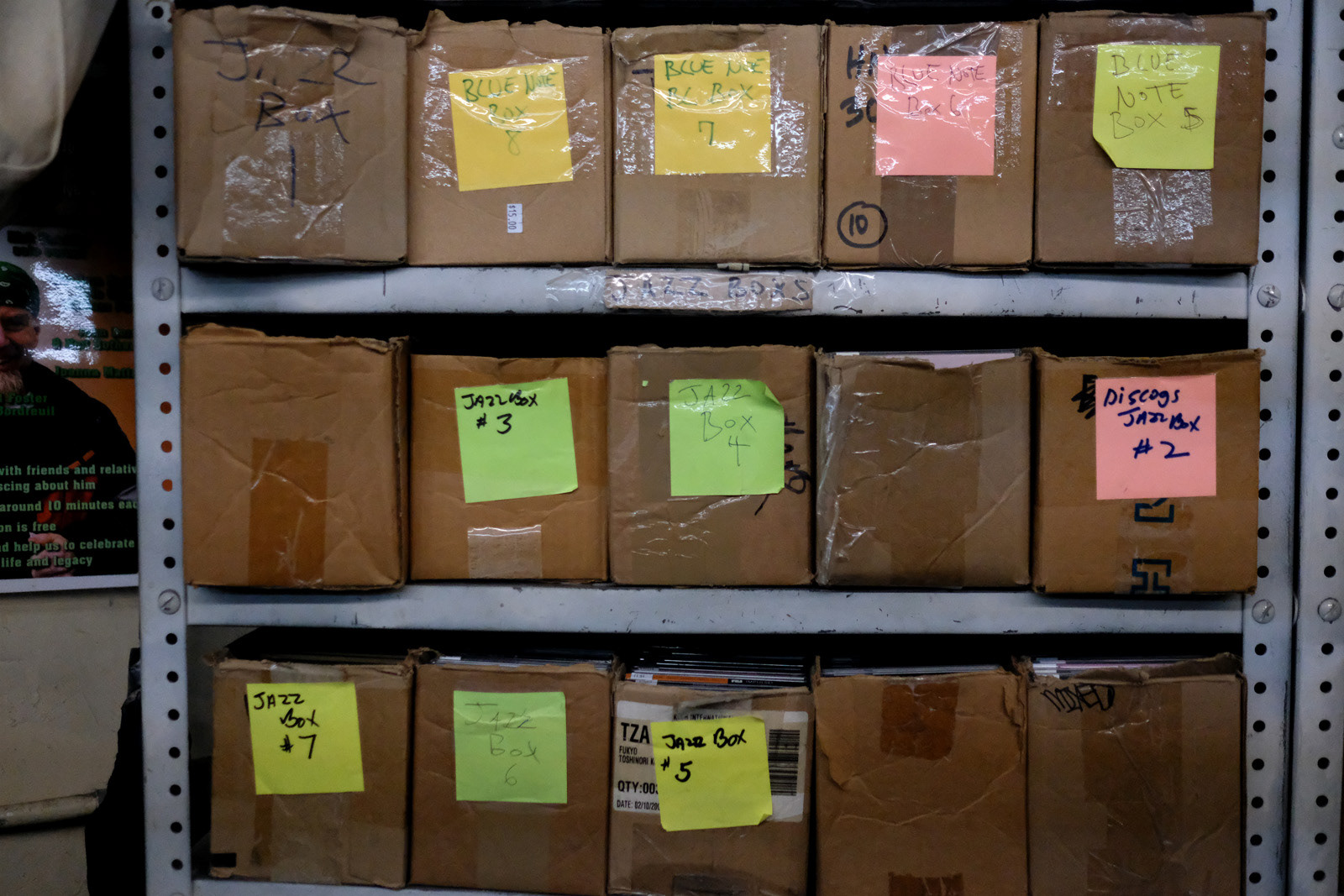 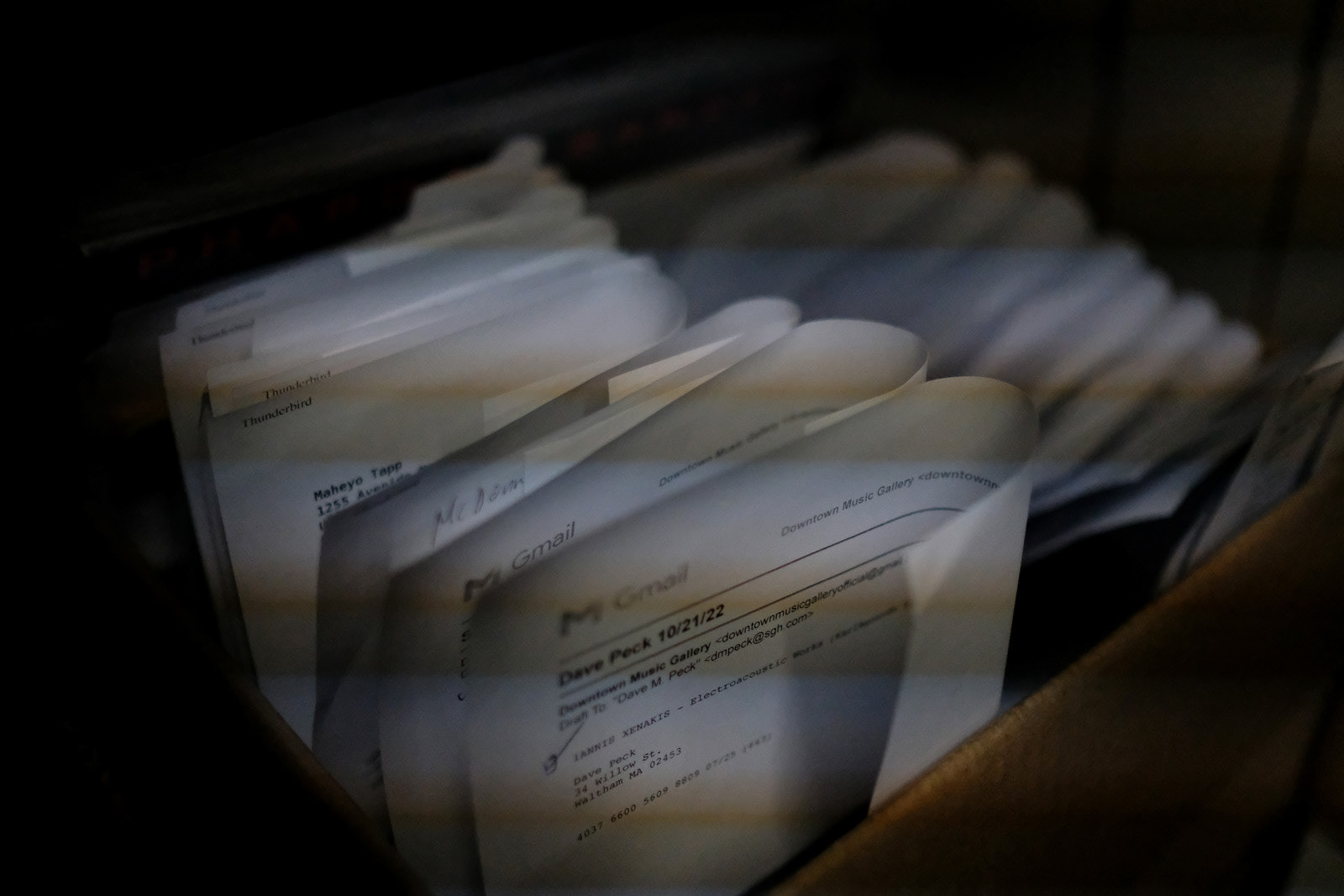 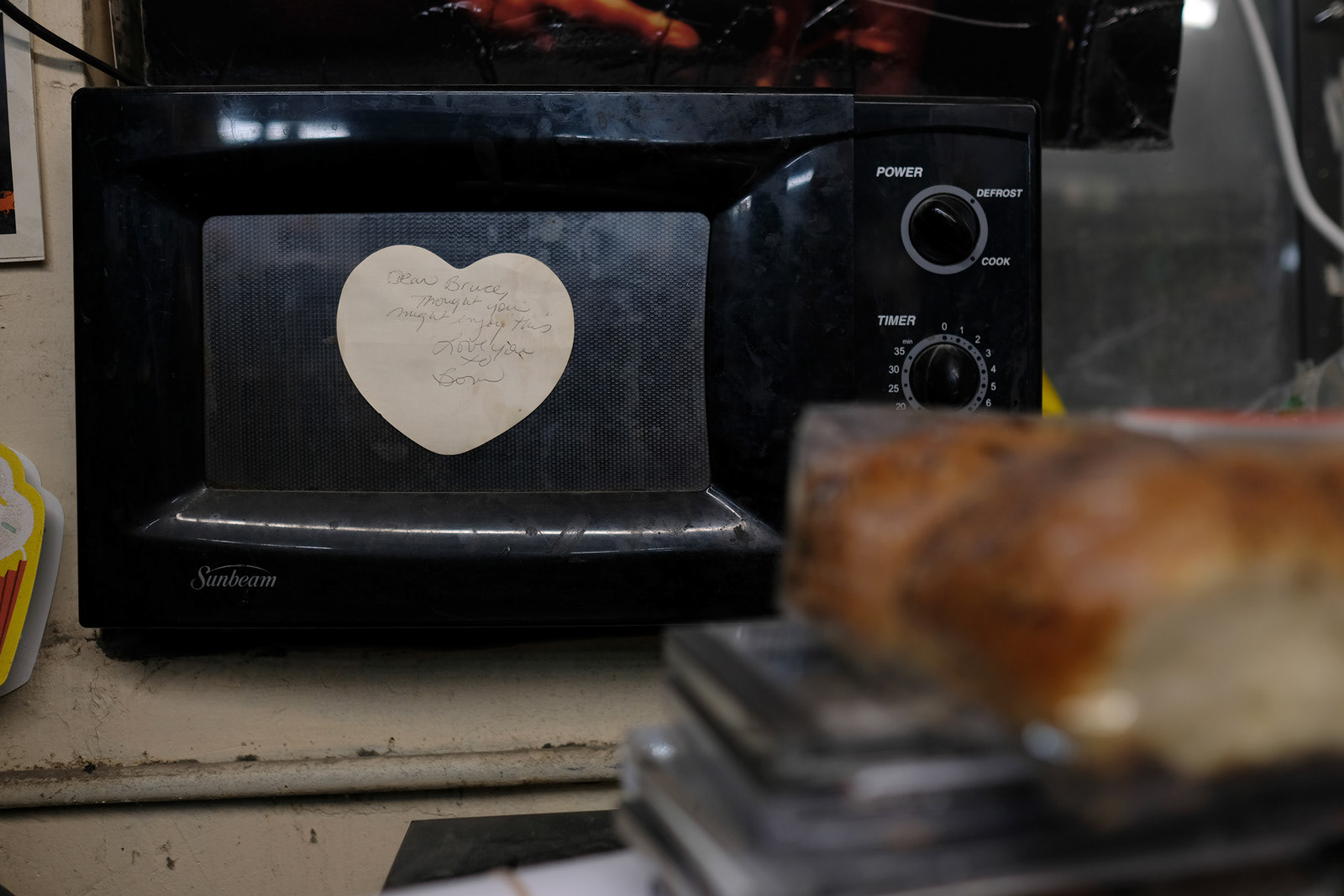 The DMG is filled to the brim with musical memorabilia, records and CDs ready for dispatch, some tapes from Gallanter's private collection and some creature comforts gifted by friends and well wishers
“There was this feeling of  universal loneliness,” said Gallanter. “I don't live with anybody and I felt kind of lost. I did my best to take care of myself every day. I would go and sit on the train track near where I lived because that's the highest point in Rahway and I watched the sunset. I learned to pace myself and to do some meditation and listen to the birds chirping. That helped me deal with things better.”
Once the newsletter hits inboxes, customers order hundreds of rare CDs via email, DMG’s store on Discogs.com, or directly through record labels like Tzadik, (owned by the prolific composer/musician John Zorn) for which DMG is a distributor. The DMG is a specially curated assemblage of music. Most of the catalog is composed of small record labels that are self produced by the musicians. Some are collectors items that can't be found anywhere else. This is music that would have been lost to the world if not for the DMG, which also remains an important center to nurture musicians.
Claire de Brunner has been playing the bassoon for over 45 years and has been a fixture at the DMG, both on and off stage, since 2007.  “Bruce really cares about the music. He knows about the music,”  said de Brunner,  “He's doing it out of the goodness of his heart, and when we play here, we don't make any money. So it's really, you know, a musician's place to play and that's why it's special.”
Despite the love and support they have nurtured, sustaining the store and the scene is looking increasingly difficult for Gallanter. He shared, “Over the last couple of years our mail order has been slowing down and people are buying less CDs. So I'm trying to figure out what I'm gonna do with this place. At this point we're having a hard time paying the rent.”

Every available space in Gallanter's modest apartment in Rahway, NJ, was stocked with his personal music collection.

Beyond his responsibilities to the store, Gallanter has a private musical life. He has amassed over 100,000 rare records, CDs and cassette tapes that comprise his personal collection, along with almost 3000 concerts that he has recorded over the decades. The sheer volume of this vast analog collection has taken over his two bedroom apartment in Rahway, New Jersey, leaving him space for a work desk, a half kitchen and a bed. “I’d like to have my home back, and find a safe space for the music,” said Gallanter, who lives very frugally to support a robust scene that is completely free. No money has ever exchanged hands at the DMG gigs.

Gallanter introduces guitarist Max Kutner. He shares an affectionate relationship with all the musicians who perform at the DMG.

Reflecting on his legacy, Gallanter said he wanted to create a library that would house his collection of music after he passes on. Something that would serve as a repository for musicians, academics, journalists and music lovers. For him, this is how music and musicians that would otherwise be forgotten could be enshrined in the collective cultural memory. Gallanter is currently seeking help to finance, set up, and sustain this publicly accessible, free archive of rare music.
“I find that creative music inspires people. I find that free music, free gigs is an example of democracy in the making because it's a bunch of humans creating something,” said Gallanter reflecting on his years in music, “They don't have to speak the same language, they just have to understand the parameters of creating stuff. So that's why the gigs in the store to me are important because people have to see that you can create something out of nothing and that it's more about cooperation and understanding than it is about division and all the other stuff that breathes down our backs and separates us.”

The Downtown Music Gallery can also be supported by visiting the store, ordering off their page on discogs, and checking out their website.

Third Eye Tour
↑Back to Top